Five Things to do NOW to Own Your Seasonal Allergies 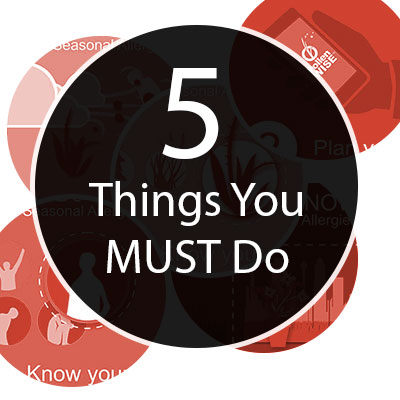 When the plants of the world have ganged up against you and you are attacked by pollen and mold, it's nice to know that fighting -or retreating- can reduce the severity your allergy symptoms. Allergen load (the number of allergenic particles you're exposed to in a certain amount of time) can be reduced by trying these five tips:

Are you only barely sensitive to something, intensely sensitive, or somewhere in between? And, not all allergens are created equal, so they may not create the same level of intensity in your symptom response. Knowing how sensitive you are can inform the steps you take to find seasonal allergy relief. A person that has an intense, get-me-to-the-emergency room-now sensitivity should be more careful than someone who only sneezes 3 times a year.

Tip 2: Use the Best Data to Plan Your Day

Not all pollen data are created equal. Pollen counts in the Pollen Wise ap come from numerous automated pollen sensors scattered across the United States, Europe, Australia and Mexico. They sample the air continuously, report every minute or so, then those reports are used to generate an hourly average. This average is far more relevant than one that reports yesterday's average. That's what most news stations and apps that report pollen are using! Imagine if all your doctor had was your average heartrate for yesterday...it wouldn't tell nearly the story that an ongoing graph of your heart's activity can tell.

With the best data you can decide if the morning or afternoon are best to walk the dog, run errands or go for a hike. For the first time ever people who want to go outside have information that allows them to make informed decisions about the allergens they'll be exposed to.

You don't have to know the identity of every plant on your continent. Start with those that are local to you AND that you have an allergy to. Investigate their pollination season relative to your neighborhood and climate. With luck you'll only need to really have to be able to identify a few plants. If you know everything there is to know about them, you can outsmart the pollen they make.

Tip 4: Manicured Landscapes and Showy Flowers are Your Friends

Tiptoe through the tulips, but don't hug a tree unless you know you don't have an allergy to it. The fact is, aromatic, colorful flowers typically use their bright colors and intoxicating smells to attract insects and birds since these animals are unwittingly carrying large, sticky, heavy pollen to other plants. In other words, showy flowers don't rely on the wind like most grasses, trees and weeds. Wind carries light pollen right into your nostrils and eyes but the heavy sticky pollen doesn't make it that far unless its on the legs of a honey bee. Don't let a honey bee get in your eye.

Manicured lawns and well-tended gardens are less likely to have wild flowering grasses or weeds like rawgweed. Be aware, however, that trees are frequent culprits in allergy season, so elm, mulberry, willow and others are still wind-borne pollinators. Steer clear of those during the spring.

If you were standing north of me on a road that ran from the North to the South, and the wind was blowing from the North the the South, and a pollinating ragweed plant was between us, I would be well-served to come stand by you because I could at least avoid the pollen from that plant. Pay attention to where disturbed soil (construction sites, agricultural fields, neglected lots) is growing weeds and where the wind is taking the pollen. If you have a choice and can be up-wind from places like that, you could avoid high dosages of allergenic pollen.

*We may receive a commission from products purchased through links on this website.